Usually a cake with fresh strawberries in Japan is prepared for Christmas. But spending crazy money in the winter on a box of plastic berries is pure madness. Therefore, we will bake it at the beginning of summer, waiting for the first ground strawberries, the Japanese will not be offended by us.

At first glance, there is nothing Asian about this cake. Although the authorship of the recipe belongs to Fuji Ranemon, a Japanese from Yokohama. This name does not tell us anything, but for the Japanese, Fuji Ranemon is the king and god of confectionery art. In the 1920s, after studying in the United States, he opened the Fujiya confectionery in his hometown, where he became the first in all of Japan to make Western-style desserts. Strawberry cake is one of his main achievements. Based on German berry pies and the American "Angel Biscuit" on whipped proteins (this is his official name), he created his own cake with a weightless biscuit dough, snow-white cream and a filling of live berries. Today, strawberry cake, cut into neat squares with a scarlet berry on top, is sold in Japan on every street, its popularity has skyrocketed in the Instagram era, the white and pink cloud of the cake looks fabulous in stories.

But it's not just about good looks. The biscuit, now called Japanese all over the world, turns pink, like a bride's blush, and has that degree of tenderness that does not exist in nature, which is most accurately conveyed by the English word fluffu (the Russian equivalent of "fluffy" although reflects the essence. But gives rise to unnecessary associations). Butter cream - thick and at the same time airy - melts in your mouth. Strawberries, like no other berry, add to the sensations of piercing summer freshness. In sum - an example of minimalism, causing persistent addiction. We strongly recommend trying it. And especially for those who "never eat sweets."

Start with a biscuit. Separate the whites from the yolks of 4 eggs. Put the whites in the refrigerator for now, and pour the yolks into the mixer bowl. 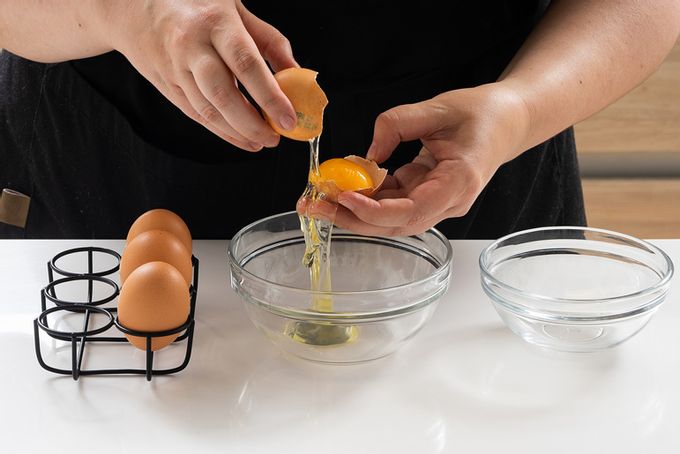 Add 20 g of sugar (regular fine, powdered sugar will still be used in the recipe, so do not confuse). Mix quickly, just enough to dissolve the sugar and turn the yolks pale. 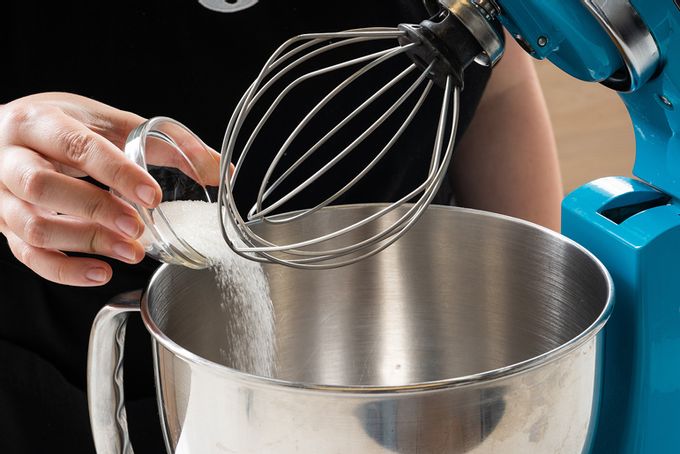 Pour in 20 ml of milk, add red food coloring (the color should be quite intense) and half a teaspoon of vanilla extract. Whisk until smooth. Then pour in 1 tbsp of vegetable oil and whisk again. The result should be a mass of sour cream consistency of a fairly intense color. If it looks faded, add more dye.

If there is no suitable coloring on hand, half of the milk can be replaced with concentrated strawberry syrup. Or just leave the biscuit snow-white - this is also beautiful. What you definitely don’t need to do is, as Internet confectioners often advise, to color the dough with beetroot juice. Firstly, the color will turn out to be gloomy, rather purple, and secondly, the beets also give a taste of the earth, which will be completely inappropriate in the cake. 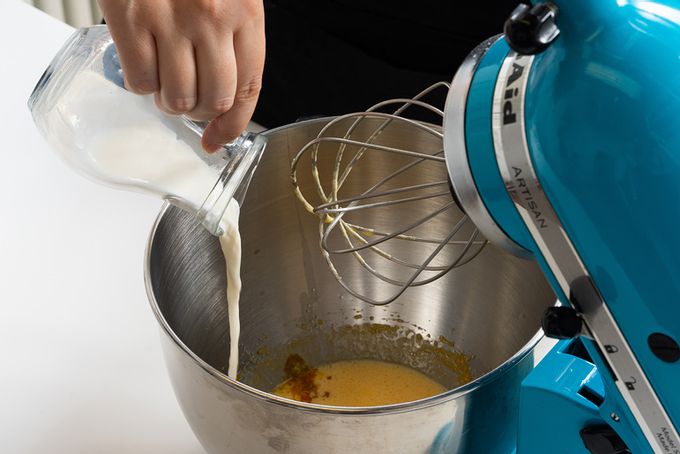 Mix premium flour (30 g) with corn starch (30 g) and sift three times (this is important!). Then, while continuing to whisk, gradually pour the dry ingredients into the bowl until all lumps disappear and the mass thickens. 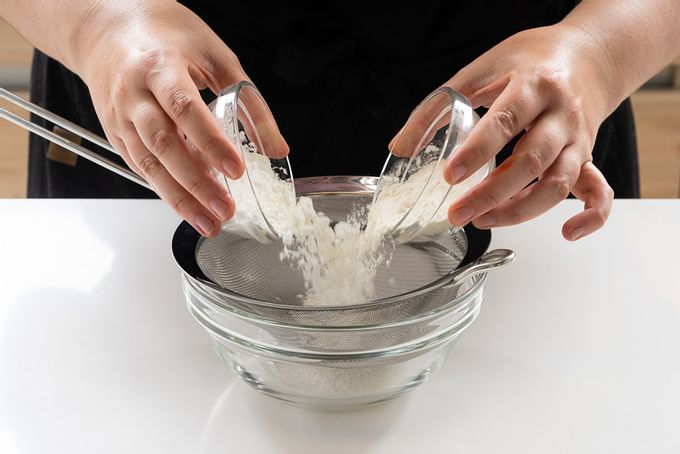 Transfer the yolks to a bowl and whisk the egg whites separately. Just pre-wipe the mixer bowl with a cloth soaked in vinegar. The fact is that proteins are poorly whipped in the presence of even a drop of water or fat, and vinegar helps to get rid of them. As soon as the proteins foam, start adding powdered sugar (60 g), sifting it along with a pinch of salt - it acts as a stabilizer here. Added a quarter - add more, continuing to beat the whites to persistent peaks: the protein mass should become dense, glossy and stick to the whisk. 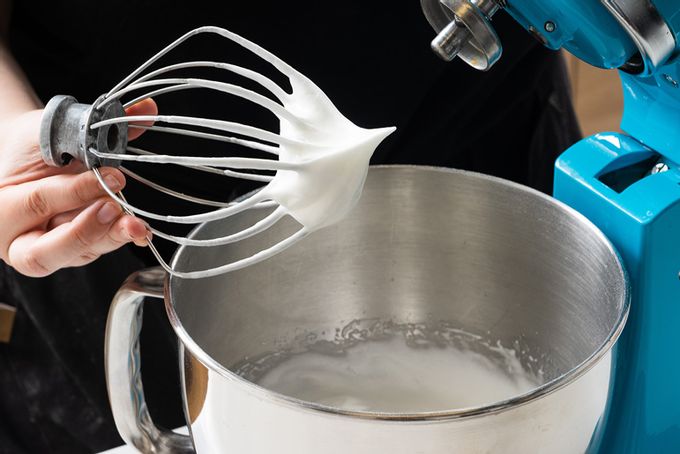 Gently, in parts, using a spatula, combine both resulting masses. Try not to lose volume of proteins, then the biscuit will turn out airy. 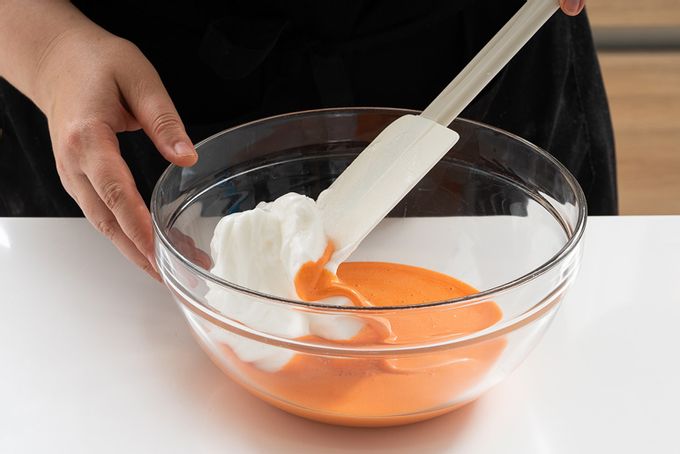 Line a rectangular tin (22 x 23 cm, if it's a little smaller or bigger, don't worry) with baking paper. Divide the resulting batter into the tin and tap the tin on the table to get rid of large bubbles and smooth the surface of the biscuit even better. 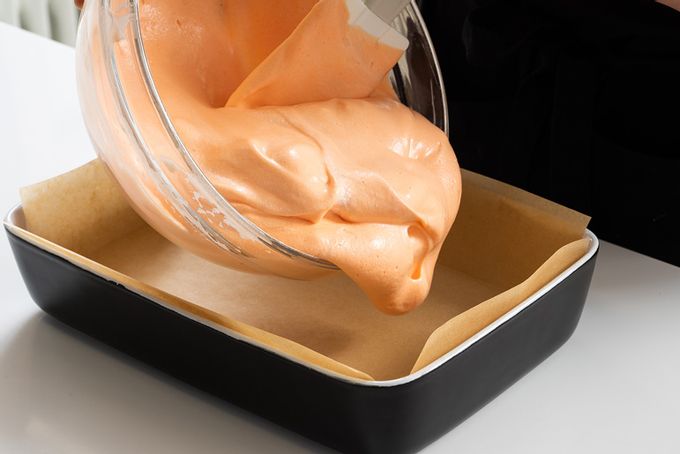 Bake the sponge cake in an oven preheated to 165-170 degrees at an average level of 25-30 minutes, it should become ruddy and springy. 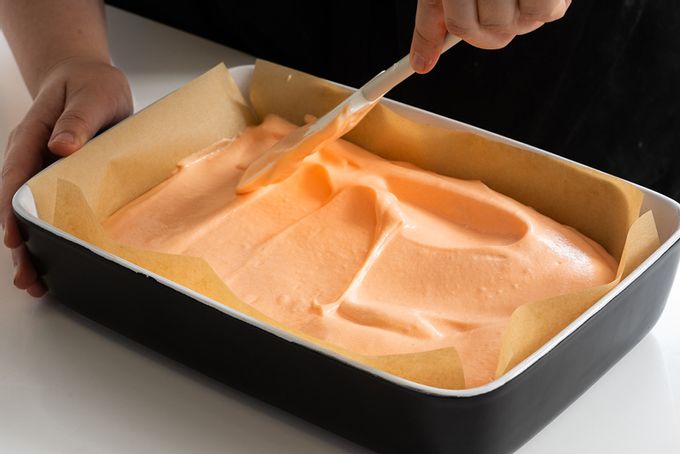 Remove the biscuit from the oven, remove from the mold, invert onto a wire rack. Then remove the paper and let the cake cool completely. 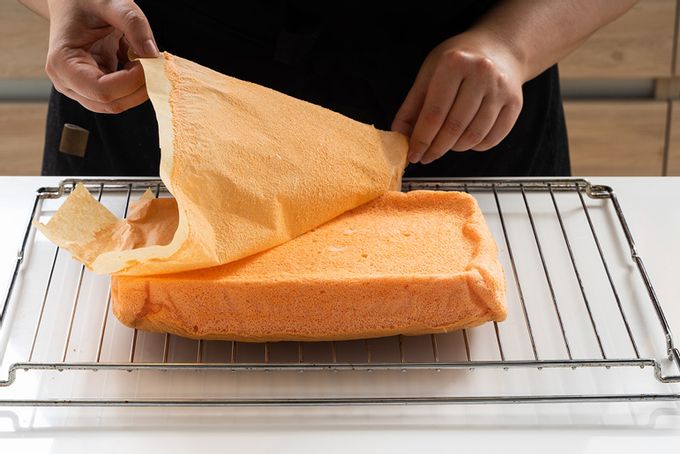 While the cake is cooling, make the cream. He is very simple, but capricious. Take 200 ml of the highest fat cream you can find (33% minimum). Start whipping the cream at high speed, pouring 25 g of sugar in a thin stream. As soon as they set and begin to increase in volume, and the sugar has dissolved, reduce the speed of the mixer and whip the cream until you get a thick cream. Here it is important to catch the moment and not to kill the cream, otherwise, instead of the cream, something exfoliated will turn out. 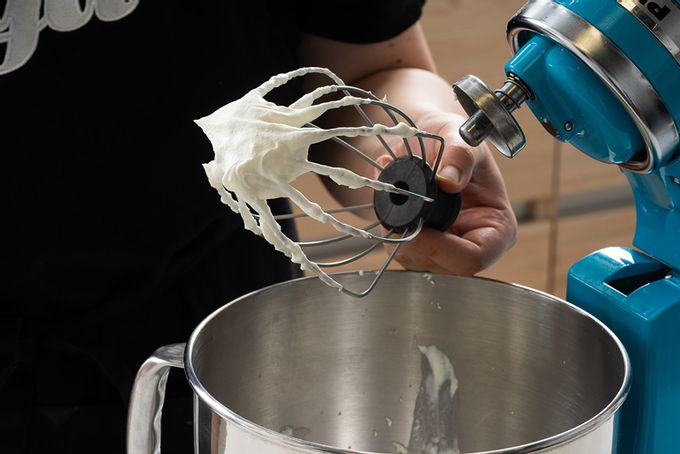 Strawberries (150 g) cut into thin slices. Place the cream and strawberries in the refrigerator for 30 minutes.

When the biscuit has completely cooled, cut off the crust around its perimeter and cut the biscuit across into 2 equal-sized cakes.

It remains only to collect the cake. It is better to do this in a split form so that the cake is even. If you collect the cake just on the work surface, then put baking paper under the bottom biscuit so that it does not slip and the cream does not stain everything around.

Cover the bottom cake with 1/4 of the cream and spread evenly.

Lay the strawberry slices on top in a single layer.

Apply another 1/4 of the cream, smooth again. Place the second cake on top.

Cover the top and sides of the cake with a thin layer of the remaining cream. Place the cake in the refrigerator for 30 minutes.

Once the cake has cooled, brush the top and sides with cream again and level with a spatula. The top layer of cream should be approximately equal in thickness to the cream layer between the cakes. Place the cake in the refrigerator for another 2 hours.

Cut the cake into small pieces (about eighths) and garnish each piece with a strawberry quarter. Keep the cake in the refrigerator before serving.